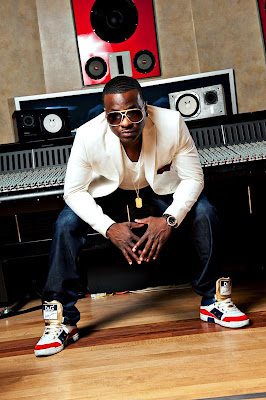 Unless you geek over songwriting and production credits within the pages of an albums artwork, you're most likely unfamiliar with the guy responsible for the majority of The-Dream's big singles. Not to mention J. Holidays smash "Bed".

Singersroom got a chance to interview the dude recently and since I basically praise everything the man does, I've copied and pasted the whole thing.

You check it in its original state here.

Singersroom: Tell me about your musical roots…

Carlos “Los DaMystro” McKinney: I come from a large musical family, one of the biggest jazz families out of Detroit. My uncle is one of the greatest piano players in the world. I have an uncle that played trombone, another uncle that’s a bassist, another uncle’s a drummer and they all played with very renowned jazz musicians from Sonny Rollins and Elvin Jones to Dizzie Gillespie…the list goes on and on.

I started playing the piano at 3-years-old and from there I studied classical music and Jazz for years. I started playing in my first band when I was eleven years old, which was my uncle’s band. They had to sneak me in the back door of cabarets and clubs because I was under age. So I started off real young, playing piano in live music bands. Then I got into production. The way I actually started production was I had gotten a little four track recorder and I started reproducing music for singers who wanted to sing in talent shows or community shows or whatever. I started reproducing different music for them to sing over, kind of like a karaoke band track. And that’s kind of how I started production.

Singersroom: Wow. As far as production goes you had such a simple start just recording over songs and now it has just skyrocketed.

Carlos “Los DaMystro” McKinney: Well, yeah I was doing that when I was young, from there it was a whole other journey. I started playing in bands. I toured the world as a jazz musician.

Singersroom: I also read that you were an assistant composer to Mtume on “New York Undercover”. How did that come about?

Carlos “Los DaMystro” McKinney: I was still playing jazz and Mtume is my Godfather. His family is really good friends with my family. He comes from Philly but we kind of have the same background. He comes from a musical family, the Heath family, which are great Jazz musicians. His family was like my family but in Philly.

So he (Mtume) started doing “New York Undercover” and I told him I really want to learn how to compose and get into TV and Film, so he told me to just come on up and gave me a tape to see where I was at and so the first time I scored he actually used it. And that’s how I got the job doing New York Undercover. At the end of each show a known artist would come in and do a cover song. So, that was [my] introduction to production again because, I helped produce (with Mtume) artist from Patti Labelle and Luther Vandross to Aaliyah and everybody that pretty much came through. So that’s how I got back into production.

Singersroom: From working with those artists, is that what led you to produce R&B full time?

Carlos “Los DaMystro” McKinney: I had been going on the road saving up my money and every time I got back from a gig or a trip I’d buy a new piece of equipment and I just put it together in my house and really started capturing production. So from there I started developing artists. I ran into an artist I liked out in San Francisco, and we got her signed to Def . She never came out but, I got into the Def Jam system. So the next artist I had caught the attention of Clive Davis, then I got into the J records system and started producing a lot of records for Clive. Then that project never came out either. Then I had to actually stop producing because I had a fire at SugarHill Studios. I was working out of there and the whole studio burned down. I basically lost everything in that fire. It took me back; all my MPCs, all my equipment, my records, computers etc. so that was a real difficult time for me. After that I couldn’t do anything, so I went back on the road and played Jazz for about a year and just kind of disappeared off the scene. When I got tired of doing jazz I came back and started developing another act. I had the meeting up at Atlantic with the group. Darryl Jones was there…brought the group in front of the whole Atlantic records staff. From there I ran into a friend of mine that I knew from back in the day and he heard my music and was like ‘Los where ya been? I haven’t heard from you in like a couple years.’ I just told him my story and he was like “well I’m working on a girl group and I’ve always loved your music so come down to Atlanta and work on the group with me.” So, I flew to Atlanta and never came back. He had the girl group and he had an artist, J Holiday. J was pretty much finished with his album at the time. So when I got down there I worked with him on his smash single, which was “Bed.” So that’s where it all started.

Singersroom: So is that what took you from Detroit? Atlanta is currently your home production base?

Carlos “Los DaMystro” McKinney: Yes. I moved from Detroit to New York. I was only supposed to go down to Atlanta for six days to work on the group. But it just worked out that it was a lot of work and everything just fell into place in Atlanta, you know all the producers [and] all the writers. So I went down there I was working out of RedZone, and that’s how I linked up with Dream. You know Dream was working out of RedZone as well. So, when I got down there everything just came together. So I decided to stay in Atlanta and Dream and I had great chemistry as Producer-Writer. From there it was “Bed;” then we did “Shawty is a Ten,” “Purple Kisses,” “Play in Your Hair,” “Fast Car” “Trading Places” (Usher)… and we just kept going.

Carlos “Los DaMystro” McKinney: You know what; I don’t really try to make a hit. I just try to make good music. I just try to make good music and enjoy what I do. That’s the formula for me to translate to hit records is: I love what I do, I try to make great music, I try to not get caught up in the business side of it. You know if you make a hit record it’s going to find its way to a hit artist. Some records get lost. I’ve had some records that I thought were hits get lost in the business but you can’t get bitter over it. That’s what really drives it, it is me just enjoying it, being around it everyday, enjoying myself and making music everyday. For me that’s been my formula and I think it shows in my music that I enjoy what I do.

Singersroom: Which you can tell even how you talk about it; it doesn’t sound like a job for you it sounds like something you do for fun, which a career should be…

Carlos “Los DaMystro” McKinney: It’s too much fun. I’m having too much fun, literally I’m in Vegas right now, I have some really good friends out here and when I’m making music in the studio we have about 20-30 people in the studio. Just having fun and vibing, I’ve come up with a lot of tracks that way… you know just people in the room; you want to make them dance and get their reaction to what you’re doing. And I make beats pretty quickly. It takes me maybe 5 to 10 minutes to get the scratch. So, I like to have a lot of people in the studio sometimes. You can feel them out with what you’re doing and get a vibe [and] get flavor. They’ll tell you “okay, that’s hot!” We do have fun. I love having fun with it.

Singersroom: What projects are you currently working on?

Carlos “Los DaMystro” McKinney: Right now I’m in the studio with Jasmine Sullivan as we’re speaking and working on her new project. I just finished up Mariah Carey…finished up R. Kelly. I’m going back in with Jamie Foxx for his new album. I think we’re about to start The Dream’s new album. And I think that’s about it. I went in [the studio] with Mary (J. Blige). I think we’re supposed to go back in sometime soon. I just finished up Brutha on Def Jam and Leona Lewis, Jordin Sparks, Fantasia. I’ve got some upcoming things. I’m also working on my artist her name is Tayma Loren, she’s signed to my label, it’s called DaMystro. We have her single coming out very soon. So, I’m working hard.

Singersroom: Tell me about your company Da Mystro LLC?

Carlos “Los DaMystro” McKinney: I’m doing it as an independent now. My first artist is Tayma Loren from Detroit. Great singer. Great vocals. Great entertainer. I’m partnered with John Huffman from The Real Content, that is a leading cutting edge on digital distribution. So were trying to break artists, not the old ways that the labels use, but via internet and mobile phones mobile marketing, things like that.

Singersroom: What performer would you love to work with that you haven’t yet?

Carlos “Los DaMystro” McKinney: Beyonce. She’s just an amazing talent with an amazing voice and that’s the one person I would want to work with.

Carlos “Los DaMystro” McKinney: They are very professional. I think a lot of these younger artists need to take note of how professional they are. They get in, they’re on time, they get right to work and they get it done. Mariah is just chill and she knows what she wants, and it’s the same thing with Mary. They know what they want and they’ll tell you ‘okay that’s not it’. (Laughs)

It’s good and it’s challenging on that level that you have to make sure that they’re pleased and motivated. But they’re great! I love working with Mary, her energy is just intense, and she’s fun and just very cool.

Singersroom: Before you retire from this game, what legacy would you like to leave on the industry when it’s all said and done?