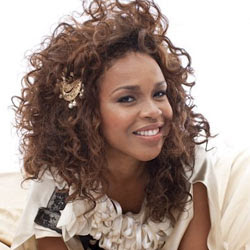 "So Happy" is written by Terrell King and produced by ME! It debuted at #40 on Billboard Gospel Chart last week. I'm yet to find out where it sits this week. Lets hope it moved up though.

Here is a short writeup on Karima:

After selling more than 500,000 units, releasing six acclaimed albums and garnering a host of Grammy, Stellar and Dove award nominations as a member of the Gospel group, “Virtue,” lead singer and group co-founder, Karima Kibble (wife of Joey Kibble from Take 6) is set to release her eagerly-awaited solo debut, “Just Karima!” on September 22, 2009.

You can pre-order Just Karima now from www.nseasonrecords.com. In stores Sept 22 via Life Music Recordings.