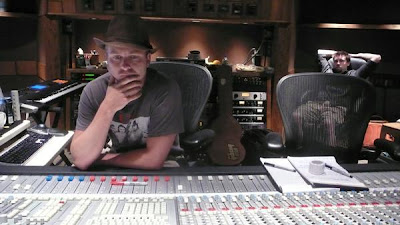 I'm a week late on this because until recently I've neglected what was once my favourite website, Idolator. Not to worry, we've reunited and I am again an avid reader.

Here is the interview they conducted with Ryan Tedder, one of the most successful songwriter/producers of 2009.

"I was just talking to Max Martin the other day—he was an idol of mine, and so now he and I have developed a friendly relationship. The single greatest email I ever got in my life was Max Martin emailed me about a year-and-a-half ago and said, “There are only two songs ever written that I’ve told anybody I wish I’d written.” And he said, “You wrote both of them.” I saved the email!"

How did the OneRepublic song “Marchin’ On” get selected to be on Timbaland’s Shock Value II—albeit on the “deluxe” edition?
That’s really interesting. It was actually not finished. “Marchin’ On” was the last song that made the album, and it came about as an accident. I didn’t know that the album was even being made, and then all of a sudden I find out it’s being made and it’s gotta be finished in three weeks and Timbaland needs a song from you. So we did a song that we really liked that we were considering saving for our next record, and Tim heard it and he liked it but he thought it was too happy. He wanted something a little bit more somber. I just kind of kept beating my head against the wall, and tried four or five different ideas for songs. A few of them were great. I tend to not finish songs if I don’t think that they’re gonna be great. So I had four unfinished song ideas, and on the fifth one I just decided to do something really, really simple. I came up with a verse and chorus to “Marchin’ On,” I think I was in Minneapolis in some studio, and then sent it to Tim and he freaked out on it. He [had] asked me for a “Halo.” He was making all these references. I was like, I’m not gonna do that. I’m not gonna hand in something that sounds like “Apologize, Part II.” I don’t really believe in trying to rip yourself off.

Why go back there, anyway?
Yeah, it’s not worth going back. That territory, for better or worse, was conquered. So, nevertheless, I wanted to give him something that had tempo, that was four-on-the-floor, that could almost be a dance song. The funny part is it was only supposed to be on his album. Our album was done. We had ten songs. Originally our album was only gonna be nine songs, and the album title for the longest time was 9. We even had artwork and everything, but we had to scrap that because two different movies and a book and all this crap was coming out called 9. So we literally added a tenth song.

You said “Marchin’ On” wasn’t finished?
What happened was there was a miscommunication and the label thought we were putting “Marchin’ On” on our album as well as Timbaland’s album. And so they printed every single album sleeve with “Marchin’ On.” But the problem was, with the Timbaland version I only did half of a song. I did a verse and a chorus. So I find out literally the evening before the whole album was being mastered, it’s being mastered in 12 hours—and I’d just finished a show—and my manager says, “You’ve got to gotta go into a studio tonight and finish ‘Marchin’ On.’” I was like, hell no! It’s not supposed to be finished. Timbaland finished it. He was like, “No, we need a OneRepublic version now, because wires got crossed and everything’s been printed with ‘Marchin’ On.’” So that’s how that song ended up on the album. That song went from a verse-chorus to a full song literally in an hour and 45 minutes.

Read the rest on the link below: