R. KELLY ACQUITED ON ALL COUNTS 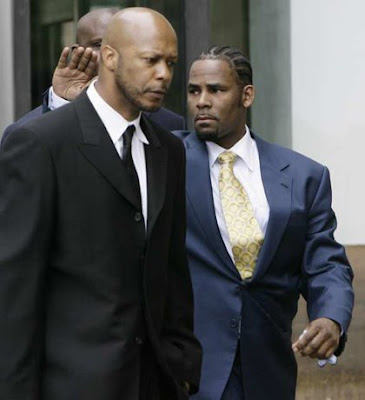 "A Chicago jury has acquitted R. Kelly on all counts at his child pornography trial.

The verdict came six years after the R&B superstar was first charged with videotaping himself having sex with a young girl. Prosecutors had said she was as young as 13 at the time.

Both Kelly and the now 23-year-old alleged victim had denied they were the ones appearing on the tape, which was played for the jury at the beginning and end of the trial.

The issue of whether there was or wasn't a fingernail-sized mole on the man's lower back was a subject of hours of testimony. A defense witness told jurors there was no mole on his back, proving it's not Kelly, who has such a mole."

Check out the full story here

I find it hilarious that the case came down to a star witness (who obviously saw dollar signs) who claims she'd slept with R. Kelly and the victim and whether or not the man in the video had a 'fingernail-sized mole' on his back. The prosecutors were tripping thinking they could get by on this.

I'm impartial to whether he's actually guilty or not but its quite possible he just OJ'd this shit and he's gotta be feeling like a fuckin ton of weight has been lifted off his shoulders and his bank balance. haha

I'd love to see a Chappelle skit based on the trial .. wow I miss Chappelle's Show.