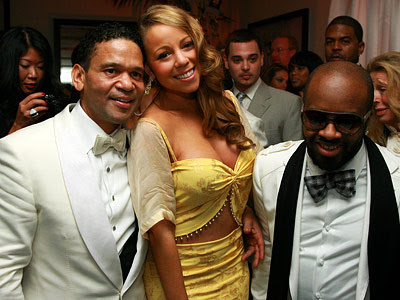 Theres been rumors circulating that Mariah has fired her manager Benny Medina after discovering his recent efforts to re-aquire Jennifer Lopez. Atleast this is what Pagesix is saying.

MARIAH Carey is moving on from her manager, Benny Medina. Sources told Page Six that Carey had been unhappy with Medina - especially since she heard rumors that he was courting his former client, and her nemesis, Jennifer Lopez, again - and booted him on Friday. But Medina said, "I just had lunch with Mariah today. We're restructuring her company and streamlining it. That's all." If he ends up streamlining himself out of a job, Carey would be his third major loss this year - Tyra Banks and Usher both recently left him.

If anyone is getting fired it should clearly be Troll Guy. From where I'm sitting he's the one damaging Mariah's career if anyone, at this point.