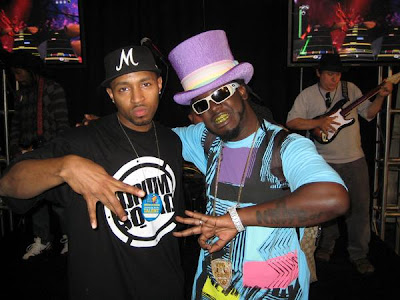 I've been watching Drumma Boy slowly become the next hip-hop super producer since, well, lets say USDA's "White Girl" but properly after Plies "Shawty". Comparable to The Runners domination of southern hip-hop in 2006/2007, Drumma Boy is beginning to own hip-hop in 2008 and will most likely dominate the first half of 2009.

Despite not having a Billboard #1 record yet, Drumma Boy has produced Jeezy's "Put On", Rick Ross' "Here I Am", Rocko's "Umma Do Me", Plies "Shawty", USDA's "White Girl", T.I.'s "What Up" and just about half of Jeezy's Recession, amongst a bunch of other joints that make you feel like you're on steroids.

While there's nothing complex about DB's production, the guy stays making anthemic rap shit. Like The Runners did, I hope he switches up eventually and shows us more than just the 808 sound. Until then:

"Bitch I'm amazin, look what I'm blazin' eyes so low yeah I look like an asian"