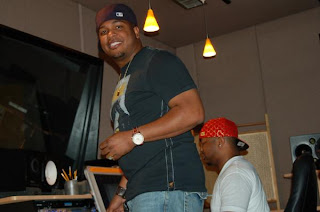 I got the chance to listen through Usher's new album Here I Stand on my flight from Melbourne to Gold Coast last week and while I don't love the album, I think there are some incredible moments courtesy of C. Tricky Stewart, The Dream, & LOS Da Maestro.

"This Ain't Sex", "Trading Places" & "Moving Mountains" are all outstanding records, from the insanely polished production to the inventive songwriting to the uber-clean layered vocal production. These three songs appear in the aforementioned order at the front end of the CD and they trump everything else on the album which makes me start to think Here I Stand might appear to be a weaker album than it really is, simply because of how the songs have been sequenced.

Just Blaze actually spoke about cohesiveness & album sequencing in his extensive interview with hiphopgame.com a couple months back. These albums usually get a bad wrap but contain great songs ala Jay-Z's Blueprint 2.

Here I Stand is expected to come in @ #1 on the Billboard Albums Charts with around 450k in sales. Head over to hitsdailydouble.com for more info.